Hotelier, Karen Ridley, has owned and run a popular country hotel for more than 15 years. The Snooty Fox, in Looe in Cornwall, is well known for its peaceful, rural setting and excellent breakfasts. Over the years, Ignition has helped to support the business by providing finance for general refurbishments, fit-out and equipment.

Having enjoyed success with the Snooty Fox, Karen and her family recently set their hearts on a second venture, taking over the lease of the Harbour Moon Inn in East Looe.  Sitting right on the harbour with stunning views across the coastal town, the Harbour Moon Inn certainly seemed a viable business opportunity with plenty of potential

The Harbour Moon was in need of some refurbishment and building works, as well as updated kitchen equipment, but when Karen approached her bank for a loan, they were unwilling to help.

Karen comments: “ I had an excellent track-record, had put together a strong business plan, and could demonstrate that the Inn was in a popular, central location and likely to be successful.  But despite this, their lending criteria was so strict and inflexible, that we didn’t quite fit their profile.

“Although we’ve been with the same bank for many years, it felt as if they didn’t know me or my business at all.  The business managers change so frequently; we’ve had at least five since we started out.”

As a result, Karen turned to Ignition for advice, and got in touch with Director, Steve Hunt, who has been her contact for over a decade.  Steve was able to put together a bespoke finance plan for the business which combined asset finance with a business loan.  Tangible assets such as kitchen equipment and a new EPOS system were financed through a standard Hire Purchase plan, while other costs such as painting and decorating that would not qualify for asset finance, were covered by a competitive Business Loan.

“We’ve known Karen and the team at the Snooty Fox for years, and could see that this new business venture was an excellent opportunity.  It appears that certain sectors fall in and out of favour with the banks, which can be very frustrating and baffling for small businesses with good prospects.

“By looking carefully at Karen’s needs and offering her a package with a combination of financial services, we’ve helped her achieve her goal, and are proud to be supporting a sound local business.”

“Steve at Ignition is now my first point of call for financial support.  The team there are truly championing independent businesses and will judge each one individually on its merits, rather than resorting to a tick-box exercise.”

Karen took over the Harbour Moon Inn at the beginning of the year and is already ahead of budget and doing a roaring trade.  We’ll raise a pint to that! 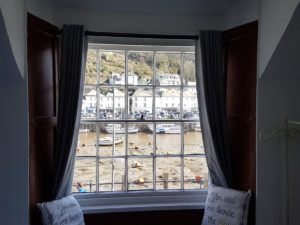