An innovative biker-themed diner in Indian Queens has enjoyed a business boost thanks to the purchase of a new motorbike for marketing.

Chapters Diner purchased the Suzuki C1500 T via Ignition, a leading UK provider of vehicle and asset finance for SMEs based in Truro.  Since then the owner, Darren Berrey, has been riding across Cornwall handing out flyers and promoting his business, resulting in a marked increase in trade.

Biking enthusiast, Darren Berrey, has enjoyed support from Ignition since the launch of his Diner early last year, when Ignition helped with the purchase of a coffee machine and furnishings.  Sadly the fledgling business, which had immediately enjoyed fantastic reviews and strong support from both the biking community and locals, was stopped in its tracks by a disastrous fire a few months later.

Thankfully by June 2015 the Diner was refurbished and up and running again, and has gone from strength to strength ever since, with Ignition helping with the purchase and fit out of a second shipping container in October 2015, doubling floor space and covers and enabling 100% expansion.

“Starting a new business is always a challenge, and the fire was certainly a huge set-back, but Ignition has supported us and believed in the business from the outset.  Chapters Diner wouldn’t be the success story it is today without Ignition.

“Our new bike has definitely attracted attention and helped us to spread the word about the diner.  We’re really busy!”

The Chapters story began when Darren Berrey was working as a Firefighter and Road Safety Adviser. He came up with the idea for a good quality catering outlet on the site of the Damerells Motorcyling dealership, serving breakfasts and burgers for hungry bikers and their families.  Darren now has plans for possible Chapters 2 and 3 on motorbike dealership sites in Saltash and Falmouth.

“It’s been wonderful to see Chapters Diner flourish from an initial concept into reality.  Darren has worked really hard, against all odds, to realise his dream and create a gem for bikers and families.  We wish him every success for future expansion and will continue to offer our full support.” 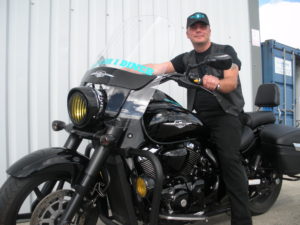